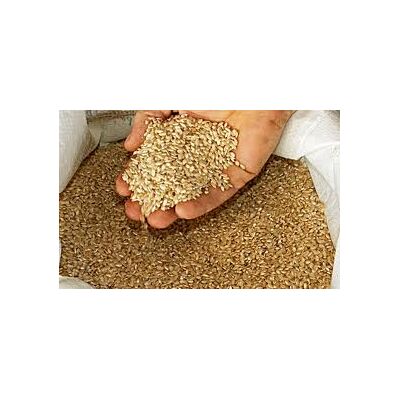 Hover over an image to enlarge

THE average Australian rice grower pumps five Olympic-size swimming pools of water onto the land to grow a single hectare of the staple grain.

Brett Slater just sits back and waits for the rain.

The northern NSW farmer is one of the country's first to produce commercial quantities of rain-fed rice.

In his first foray into rice he has harvested a bumper 300-tonne biodynamic crop at his property near Casino.

Mr Slater's hands-off irrigation technique may be the first of many necessary industry adaptations to climate change as water becomes scarcer in the traditional rice-growing region - southern NSW and northern Victoria.

''Irrigation allocations have decreased and there's been a long, steady decline in that since the mid-'90s, particularly over the last few years,'' a CSIRO climate change and agriculture expert, Mark Howden, said.

''The response to the long-term decline is people are looking to grow in other regions.''

Rice growers who, until now, have produced exclusively in the Murray Darling Basin would need in future to irrigate more efficiently, convert to dryland rice, or move north to the rain, Dr Howden said. But if trends continued, it would be near impossible to continue paddy rice production in existing areas using traditional irrigation techniques.

''Across the industry there'll be significant exploration of alternatives,'' Dr Howden said.

Australian rice growers use almost 13 megalitres of water per hectare per season, more than double that used by cotton farmers and triple the amount used by vegetable growers.

In 2007-08, feeling the pinch of drought and scant water resources, just 23 rice producers used 27 gigalitres of irrigation water, a fall of 89 per cent.

Mr Slater, who once grew soy beans, wheat and barley only, said the wet summers in northern NSW made rice-growing a logical crop for the region.

''We've got such a high summer rainfall. It fits in pretty well for us here.''

Each hectare of Mr Slater's land produces half the yield - five tonnes - of conventional growers. But without the need for water allocations, the farmer is not worried.

''We sow it like a normal crop of wheat or soy beans and, because of our high summer rainfall, it just grows,'' he said.

Our own team of delivery drivers provide top quality service. You will receive an SMS to advise delivery time with real time delivery tracking. Please let us know if you have any specific delivery requirements

We are the ONLY privately owned ACO certified organic small business retailer in South Australia. We have two primary production properties where we grow most of our produce, or we source locally as our next option, and source from interstate only as needed

If you are not completely happy with any of the produce in your order, or feel something is missing, please contact us. We will arrange a replacement for you next order